A couple of technical posts.

- August 16, 2020
Find out what the best programming language is for you to learn now in 2020.  Is Python the best programming?  Should I learn JavaScript?  What are the best programming languages out there?  Quit stalling and get to work!  https://medium.com/@denny.headrick/whats-the-best-programming-language-1a7e51ee1c71     Learn how to increase your productivity in Outlook.   https://medium.com/@denny.headrick/increase-your-outlook-productivity-59d584aca289     Find the source at https://docs.google.com/document/d/e/2PACX-1vTavXqtwYDnS_4h2zNljnZrxtyXHqD-9xPTeqPr_x7nbXqo7owDYNbC8gmGJRYojAQ22JdDCacgGfZP/pub
Post a Comment
Read more

Some People aren't Made to be Leaders

- July 04, 2020
Recently, we had a speaker that made this statement: "Some people aren't made to be leaders."  While I have a lot of respect for the individual that made this comment, I have reservations against this statement.  It's dis-empowering.  The statement suggests that skills are predetermined and bend towards the will of the Fates.  We are not living in the time where leadership is only for the select few—some bastardized form of an oligarchy.  We live in a society that espouses democratic values and equality.  We can all be leaders.  And if I'm wrong, I'd rather be wrong believing in people that be right being cynical.
Post a Comment
Read more

The Booing of Peyton Manning

- June 20, 2020
In 2013, the Denver Broncos shattered records for scoring.  They started off the season with a blistering “revenge game” against the Baltimore Ravens that featured Peyton Manning throwing for 7 touchdown passes (a single-game record) in a fashion that would characterize the season.  With such a start, it’s no surprise the team broke season records for scoring and Manning broke season records for touchdown passes. I got the chance to go to the sixth game of the season.  The game was against the Jaguars, a team that had several poor outings on the year.  I, along with all the fans in the stadium, expected one thing—a blowout. The first half, however, was bland.  A couple of touchdowns carried the Broncos with a two-point lead heading off the field at half-time.  Manning and the Broncos heard a chorus of boos as they went into the locker room.   At that point, it may occur to you that Broncos fans were spoiled.  They had grown comfortable with a certain level of performance, and they were
Post a Comment
Read more

Sacrifice Self-Interest for Others

- June 18, 2020
We just had another event that involved a speaker from an external organization.  It seemed a bit random, but there were some good tidbits that came out of it.  The best reiteration from this discussion was the notion that leaders sacrifice their own self-interest for the interest of others.  This is a theme in Sinek's Leaders Eat Last as well. The speaker invited us to read an article by Maj Gen Michael Rothstein titled Great Leaders Follow First — Nine Rules for Dynamic Followership.   The rules from this article are: 1. Think Two Levels Up 2. Speak Truth to Power 3. Don't Bring the Boss a Problem—Bring Proposed Solutions 4. Internalize and Work the Boss's Priorities 5. Give Good Readbacks 6. Hold Yourself Accountable for Your Performance 7. Don't Pass the Buck 8. Demonstrate Professional Loyalty 9. Excel at Your Job Now, this article features some—what I perceive as—redundancy.  There's nuanced differences between 6/7/9, but these are all a part of the same conve
1 comment
Read more

- June 06, 2020
A really great book by Simon Sinek—from "Start with Why" TED Talk fame. It starts with action featuring an A-10 pilot endangering himself to save others. This story launches the premise of the book.  Leaders take care of us and make us feel safe even at risk of their own safety.  Leaders like Bill Gates provide leadership in the form of providing a vision.  Sinek details that in the Marine Corps, leaders do eat last because they put their own needs last. Leaders do not need to be so obsessed with performance that they ignore the needs of those around them.  Performance and concern over cost led to unnecessary lives being taken during the sinking of the Titanic. Group over self.
Post a Comment
Read more 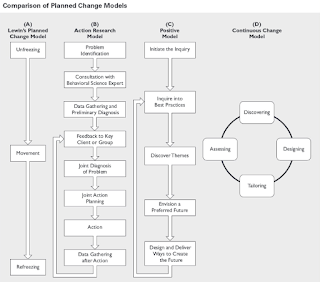 During my MBA course regarding organizational development and change, the text introduced us to a few views on it.  I've heard the first one several times, but the other models are ones that I was unfamiliar with. It also brought me in touch with Kotter's eight-stage process: 1. Establishing  a sense of urgency 2. Creating the guiding coalition 3. Developing a vision and strategy 4. Communicating the change vision 5. Empowering broad-based action 6. Generating short-term wins 7. Consolidating gains and producing more change 8. Anchoring new approaches in the culture These processes can obviously be mapped onto the three-step change model, but there is a plan to it.  It's interesting to see this thought of generating short-term wins so soon after the GO brought it up during his discussion. Any large-scale changes will be met with opposition regardless of how much the change is needed.  Change is scary.  Change is hard.
2 comments
Read more

Curiosity is the Common Thread of Great Leaders

- May 31, 2020
For the ULDP program, we had our first encounter with a General Officer (GO), and it was fantastic.  There is so much to unpack. Points that he made - The GO introduced himself and was extremely humble and considerate of our time. - The GO contrasted the shift between tactical and strategic leadership - Leaders need to be able to add value to situations.  Berating people does not add value. - When finding resolutions, it is important to hear from all parties involved. - When starting a new position, find small problems to fix quickly and establish trust - Don't laugh at concerns - Technical competency shows your investment into the organization's mission and establishes a baseline of knowledge - With educated professionals, it is better to not be authoritarian or autocratic - Think about legacy — Toxic leaders' legacies are quickly forgotten - Take charge when given the opportunity and take responsibility regardless of how small or short the job might
Post a Comment
Read more
More posts